Give Today To The Legal Fund For Jeremy Story and Dustin Clark
$80,000 Needed

Donations are now tax deductible.  All donations are going to The White Hat Institute, a non-profit setup for this purpose, and every dollar is used exclusively for the Jeremy and Dustin’s legal battle.

Two Round Rock fathers, Dustin Clark & Jeremy Story, were simultaneously arrested at each of their homes and jailed Friday, September 17, 2021.  They were accused of hindering proceedings by disorderly conduct.  Jeremy’s accusations stem from a August 16th, 2021 board meeting and Dustin’ s accusations came from a September 14, 2021 RRISD Board Meeting.

In August Jeremy was drug from the stand as he spoke calmly and peacefully because five members of the board sought to hide being exposed for covering up wrong and illegal actions.  In September the same school police were utilized to block parents from entering a school board meeting in an effort to continue to conceal the board’s illegal actions.  These two courageous men were attending the board meetings as concerned residents. They voiced concerns about the illegal actions of the board that evening who were refusing to let the community into the board meeting.  The Board only allowed 16 seated attendees into the board room that evening which has a capacity of 375 and also accommodated 80+ in June. This was a clear violation of the Open Meetings Act and now they are retaliating on these two parents. While they held parents outside the board voted to increase the property tax.  The community needs to support these brave parents, so please consider making a donation to their legal fees. Thank you.  Donations will go to defending them from fake charges and for filing civil litigation to fight the school district and establish legal precedent for parental rights.

We don’t have to fight about the right to petition our government very often. It’s a right guaranteed by the First Amendment, and even the worst office holders usually are smart enough to at least pretend to listen for a few minutes. But here’s a case where that’s not true.

In fact, Round Rock ISD is totally out of control, and has been for more than a year. When Jeremy Story and Dustin Clark started pushing back and exposing Superintendent Hafedh Azaiez as an adulterer who assaulted his extra-marital girlfriend when she refused to abort the child resulting from their illicit relationship, RRISD Board President gathered four others on the RRISD Board to protect their new employee who they hired while deliberating in violation of the Open Meetings Act.  If this series of unfortunate events was in a television series, you’d turn it off as being too unrealistic, but here we are.

This suit seeks to recalibrate RRISD by requiring it to stop using COVID-19 as an excuse to limit the number of people who can effectively be at a board meeting. As the suit tells the story, the board reduced the number of people allowed in a room with a rated capacity of 375 to 18…though right next door, others were operating normally.

This suit also seeks to de-contract Superintendent Azaiez and let him go on down the road with a minimal amount of pain to all involved. No superintendent of any school should be trying to get by with an adulterous lifestyle. Worse, the RRISD Board is aware that Azaiez assaulted his former paramour when she refused to abort the baby resulting from their affair, and STILL hey are trying to protect this guy.

But wait…we’re not done, as the RRISD Board President Amy Weir misused RRISD police to arrest Jeremy and Dustin for “Hindering Proceedings” and “Disrupting Proceedings” because Jeremy asked for the opportunity to speak on Azaiez, and Dustin tried to tell the board that a tax hike meeting has to be open to the public. The two of them were arrested at their homes and kept in jail for a night.

Yes, this is the same five trustees who ganged up on Trustees Mary Bone and Danielle Weston for essentially not being woke enough a while back.

This suit is aimed at voiding the Azaiez contract, seeks damages from the five RRISD trustees and school police who caused the false arrests, and enjoining the expenditures resulting from the illegal tax hike until such time as the board holds a proper meeting and vote on that issue.

Dustin and Jeremy Are Fighting Back For All Parents And Students..they have now filed a lawsuit and need your help to press forward. 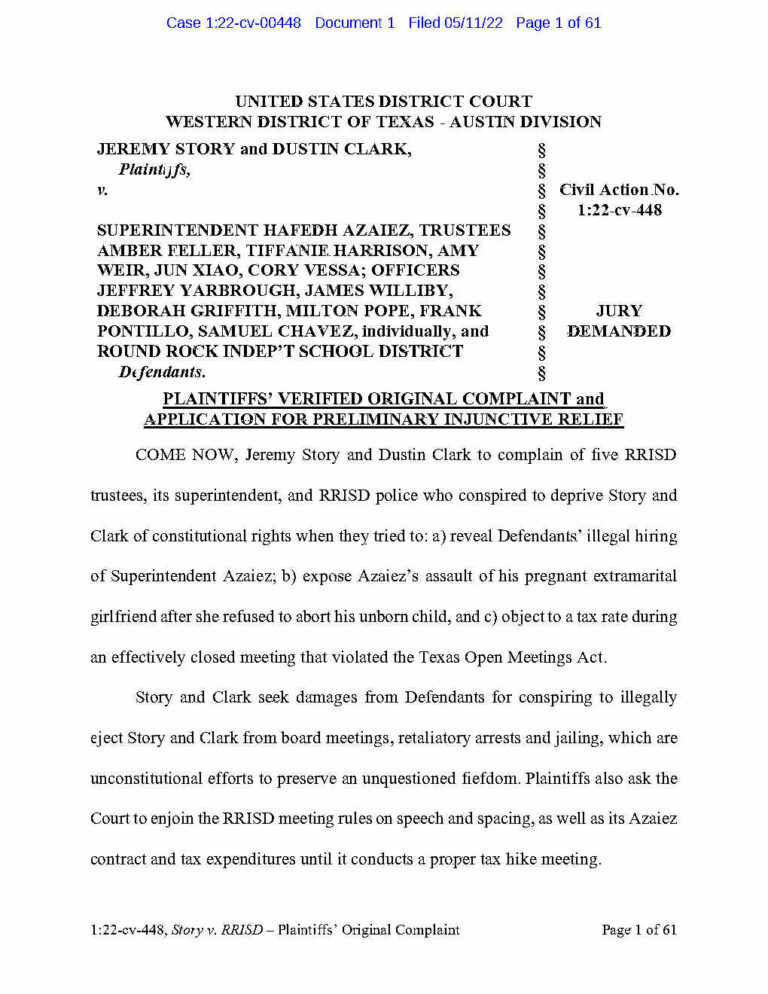 Dustin and Jeremy’s lawyers have recently filed a civil suit against board members, the superintendent, school district former Chief of Police and other district employees.  Click here to see the full case but, please don’t forget to donate.

Two fathers from the City of Round Rock, TX, Dustin Clark & Jeremy Story, were arrested Friday, September 17, 2021 and accused of hindering proceedings by disorderly conduct.  Dustin was arrested for participating by telling the board the unlawfully passed a tax increase during the Tuesday, September 14, 2021 RRISD Board Meeting.  Jeremy was arrested for being drug out of a school board meeting by cops on 8/16/21 after calmly speaking during public comments.  Neither men were arrested on the days of their supposed offenses.  Jeremy was speaking regarding the credible evidence of assault allegations against the Superintendent and pointing out 5 of 7 board member’s attempts to cover up and avoid public discussion on the matter.

Dustin Clark is a businessman and former Army Captain.  Jeremy Story is a minister and President of a national ministry to college students.

These two courageous men were attending the board meeting on Tuesday as concerned residents and voiced their concerns about the illegal actions of the board that evening who were refusing to let the community into the board meeting. The Board used police officers to block entry to the board meeting and only allowed 16 seated attendees into the 375 person capacity board room and which also accommodated 80+ in June. This was a clear violation of the Open Meetings Act.

The school board and Superintendent retaliated against these two parents with a rushed unlawful arrest made suddenly in a day after Jeremy Story filed a legal grievance against the district.  An exception was made to detail them overnight in jail in a move that was designed to silence the community.  The community has rallied to raise $20,000 to support these brave parents.  They will collectively need about $80,000 total in their legal fund to fight against this overreach for all of us, so please consider making a donation to their legal fees. Thank you.